​The Beast (666) His Glory - Gloom & Doom!
What will the Beast be like?  His character is made very obvious by the Word of God. Note the following:

Many will concern themselves only with the answers the Beast gives... and will not question his source. The Beast will be poised to deceive the world. The ability to nurture the selfish ambitions of the flesh guarantees his success up until Christ Jesus Comes. Jesus spells gloom and doom for the Beast

The False Prophet will deceive and intimidate the unbelieving world during The Great Tribulation to receive a mark that is used, among other things, to buy or sell.

There are three components to the mark of the beast:

The word used for "MARK" means to engrave. It will be a microchip insert that is placed in the human hand or forehead.

The technology already exists today to create an implantable device that will be used as an identifier. This technology will be used to foster and enhance the "mark" of the beast.

The following current events are in motion to facilitate the public's acceptance of the Mark of the Beast:

The credit/debit card is making a cashless society a reality.  The implantation of foreign objects into humans is now considered normal and even necessary.​  The Mark of the Beast will be a forced process during the tribulation that will enhance the ability of the  False Prophet  to enforce his wicked agenda.

Disclaimer:  Google advertising encouraging false or heretical teaching is not endorsed by this website. 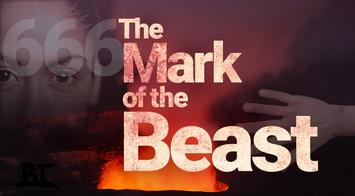