Disclaimer:  Google advertising promoting heretical teachings is not endorsed by this website.

Humanism vs. The Bible

Humanism is a religion which fervently believes that man is a part of nature and that he has emerged as the result of a continuous evolutionary process. They regard the universe as self-existing and not created.

The root of humanism is pride.  It is nurtured by hostility towards the reality of God resulting in the blind leading the blind.   You can be sure that a devout humanist considers Christianity enemy #1. 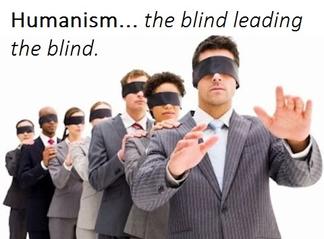 Humanism Impact on Society - ​Where does Humanism find opportunity to proclaim its vain enthusiasm for an empty salvation?

Humanism is not new. It originated with man's desire to cooperate with Satan's argument against the authority of God Word (Genesis 3).
The Christian's response to this evil and deadly assault must be separation from any obvious aggressiveness against the Word of God. And very importantly, The Christian must be soldier-like in his or her mentality by way of dressing ourselves with the whole armor of God.   It is God's will for the Believer to be different in an indifferent world.