​​God's Word is the only authority for life. Discerning Christians accept the fact that homosexuality is born out of deception and the lust of the flesh. Homosexuality is by nature a predatory behavior that inflicts society with a perverted view of life and can only result in death.

On June 26, 2013, the Supreme Court of the United States in a 5 to 4 decision, in essence, endorsed same sex marriage. In a ripping dissent, Justice Scalia says that Justice Anthony Kennedy and his colleagues in the majority have resorted to calling opponents of gay marriage "enemies of the human race."  On May 17, 2004, in the state of Massachusetts, homosexuals and lesbians were granted legal status for unholy matrimony.   This was a tragic day in America's history as this abomination is paraded as an acceptable behavior that will be protected by law.

What Are Christians To Do?

As Christians, we must vocally condemn this awful behavior and articulate the imminent danger to a nation that goes beyond mere toleration to accommodation of this wicked device. The Church of Jesus Christ  can be firm on this matter without condemning those who practice and perpetrate this sin of homosexuality (John 3:17).  Even a person in this awful life-style can be saved.

Those who refer to themselves as homosexuals and lesbians know very well they are wrong in their choice.  Homosexuality does not happen at conception... it happens in deception.

What is the answer to this tragedy? The answer is a Spirit Filled, Bible Drilled, Christ Thrilled Church that will remain steadfast on Calvary's Hill and boldly proclaim Christ Jesus! 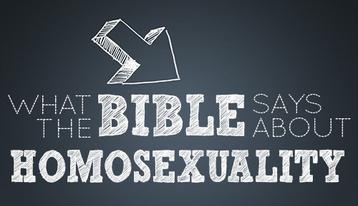 Disclaimer:  Google advertising for alternative lifestyles and/or other forms contrary to biblical teaching are not endorsed by this website.  Please be patient with us as we work to remove these ads. Thank You.

Homosexuality at Conception or Deception?

​The Bible is not at all bashful about this subject.  There  are  those in both the political and  religious  establishments  who  fervently  attempt  to  legitimize homosexuality as an acceptable and normal life-style in spite of what the Bible says.  The United States Supreme court revealed it's authoritative ruling on June 26, 2015 allowing homosexuals and lesbians equal rites in all fifty states to engage in same sex marriage.

Discerning Christians know that this ruling was initiated and fostered by Satan as an on going effort to attack God's original design of creation of male and female.  The Bible is Satan's ultimate target.  It is only a matter of time when Christians will be forced to remain silent and even tolerate what God calls an abomination.

The Word of God specifically calls homosexual behavior sin (see Leviticus 18:22; Romans 1:18-32; 1 Corinthians 6:9,11). Homosexuality (to exchange or abandon natural relations of sex) was as widespread in Paul's day as it is in ours. This behavior is strictly forbidden in scripture. Tragically, homosexuality is considered an acceptable practice by many in our world today, even by many churches. Many homosexuals believe that their desires are normal and that they have a right to express them and even demand that society as a whole acknowledge their behavior and beliefs are God given rights. Many even believe they were born in this fashion.  ​