Homosexuals - Destruction In The Shadows.

​The following is excerpted from  “‘I Refuse to Be Silent’:    Writer  says  "homosexuality shattered her marriage and family,”

Christian News Network, Oct. 13, 2014: “A mother and writer has generated much discussion following the publication of an article in which she shares her personal story of how homosexuality and same-sex “marriage” shattered her own marriage and family. ‘I refuse to be silent,’ wrote Janna Darnelle (a pen name used to protect her family’s identity), who states that behind many of the happy photographs in reports on same-sex ‘marriage,’ there are untold stories of sorrow and pain.

‘I represent one of those real life stories that are kept in the shadows. I have personally felt the pain and devastation wrought by the propaganda that destroys natural families.’

Darnelle recalled that in 2007, her husband announced to her that he believed he was a homosexual, and that he wanted to file for divorce. ‘In an instant, the world that I had known and loved--the life we had built together--was shattered,’ she said, advising that she urged her husband to stay and fight for their marriage. ‘But my voice, my desires, my needs--and those of our two young children--no longer mattered to him. We had become disposable, because he had embraced one tiny word (gay) that had become his entire identity.’

Disclaimer:  Google advertising for alternative lifestyles and/or other forms contrary to biblical teaching are not endorsed by this website.  Please be patient with us as we work to remove these ads. Thank You. 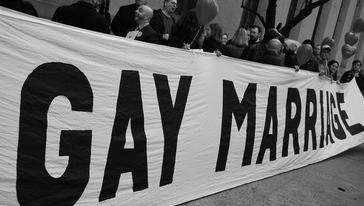 ​​She said that when the matter went to court, her husband sought primary custody of the couple’s children, and asserted that he deserved everything that he wanted in the divorce because he was a homosexual. He was granted his request, and later went on to ‘marry’ his male partner with the children present--a photograph that was featured in USA Today. ‘Commenters exclaimed at how beautiful this gay family was and congratulated my ex-husband and his new partner on the family that they created,’ Darnelle recalled. ‘But there is a significant person missing from those pictures: the mother and abandoned wife.   . . .  I am missing. But I am real, and I represent hundreds upon thousands of spouses who have been betrayed and rejected.’

She later expressed concern about the life that the children are now exposed to and how it might affect their psyche as they try to understand their own manhood and womanhood. Her husband and children live in a condo with sixteen other homosexual men. ... ‘My children are brought to gay parties where they are the only children and where only alcoholic beverages are served. They are taken to transgender baseball games, gay rights fundraisers, and LGBT film festivals. [My daughter] needs a dad who will encourage her to embrace her femininity and beauty, but these qualities are parodied and distorted in her father’s world. Her dad wears make-up and sex bondage straps for Halloween. She is often exposed to men dressing as women,’ she continued.

Darnelle explained that she understands that when a spouse announces that he or she is struggling with same-sex attractions, it may be difficult for them to resist temptation, but they must--just as a man who lusts for a woman who is not his wife--do what is right for the sake of their own wedding vows.”  End of excerpt.

Because God's Word is the only authority for life; Christians must accept the fact that homosexuality is born out of deception and the lust of the flesh. Homosexuality is by nature a predatory behavior that inflicts society with a perverted view of life and can only result in death.