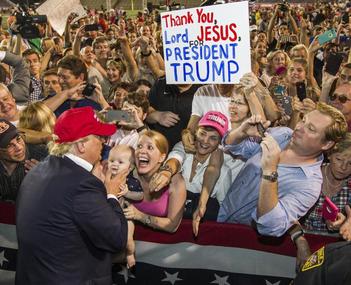 forces that bring many Americans,

including  many  Christians  under

addictive​ influences that erodes spiritual and moral advantages will continue and even rise in prominence, especially as noted by the legalization of marijuana, as well as the pharmaceutical industry pushing narcotics that lead many to the point of suicide. The craving for lasciviousness and idolatry will rise in greater prominence and permeate every level of American society. The Muslim reach of establishing sharia law will be hindered but not stopped.  The public schools and universities will remain a waste land for humanistic indoctrination that enlist and encourages anti-Christian sentiment. The horrific murdering of unborn children will continue. America will remain more defiantly divided.

Many Americans with a vast support of many Christians in the conservative movement are hoping for a savior in the name of Donald J. Trump.  What many fail to realize is that the stench of wicked addictive influences of enmity against Jesus Christ will continue to erode spiritual and moral advantages and will continue to rise in prominence.  In all  likely hood, Donald J. Trump and the Republican majority will be void of any emphasis that promotes godliness and greater freedom for Christians.  Yes, even under President Donald J. Trump,  Jesus Christ will remain the most hated person in America.

The bright spot with the results of the presidential election is the prospect of Christian influence at the highest levels of government with the choice of Mike Pence as vice president.  May God help the Vice President to influence President Donald J. Trump to know the Word of God and to be governed by it.

Many sincere Christians, including myself, care for and love America very much.  Yet, we must come to acknowledge the only momentum against the tide of evil in America is the Gospel of Jesus Christ.   So what does America really need?

The only genuine hope for America are Christians in the will of God. May God provide America with revived Churches back to the Bible and holiness. There is no other hope... Jesus IS the only hope for America and the world (John 3:16).

The outcome of the U.S. presidential election should be of great concern for Christians. God in His graciousness allowed the Clinton's to go down in humiliating defeat and justifiably so. However, nothing of moral and spiritual significance has resulted from this election.  This should be alarming to Christians.

Is ​Donald J. Trump a Christian?  Only God knows his heart. If he is not saved; it is certainly our duty to pray that God will provide Donald J. Trump a gracious opportunity to hear the gospel of Jesus Christ  and his need to repent and believe on the Lord Jesus Christ.    If Donald Trump is saved; then it is our prayer that  the Holy Spirit  will burden him to seek the wisdom of God and grow in the grace and knowledge of Jesus Christ.

There is no doubt that Donald Trump will impact America and the world as he and the Republican majority will endeavor to employ significant measures to make America a safer and more prosperous nation as compared to the failures of the outgoing Obama administration.

However, his rise to the presidency will have minimal positive effect when it comes to the spiritual and moral character of America and will do nothing to hamper America's downward slide of her animosity against Jesus Christ  and His Church.