George Washington, Commander-in-Chief of the Continental Army and America’s first President, inherited slaves and would have freed them, but he was forbidden by Virginia law to do so. At great personal cost, he vowed that he would not sell any of his slaves even though he could have benefited financially from doing so. At a time when he was struggling financially, the sale of just one slave would have brought him enough income to pay his estate taxes for two years, but he refused. He also refused to hire out his slaves, because he did not want to break up their families. He said, “To sell the overplus I cannot, because I am principled against this kind of traffic in the human species. To hire them out is almost as bad because they could not be disposed of in families to any advantage, and to disperse [break up] the families I have an aversion” (Washington letter to Robert Lewis, Aug. 18, 1799, Washington’s Writings, 1980, Vol. 37, p. 338). 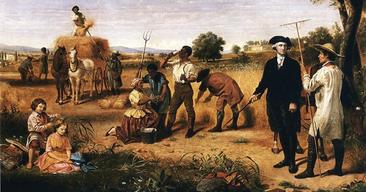 Washington was instrumental in having a federal law passed in the first year of his presidency (1789) prohibiting slavery in the new American territories. As a result, the new states of Ohio, Indiana, Illinois, Michigan, Minnesota, and Wisconsin all prohibited slavery.

Daniel Webster described Washington’s efforts to abolish slavery in America: “Soon after the adoption of the Constitution, it was declared by George Washington to be ‘among his first wishes to see some plan adopted by which slavery might be abolished by law’; and in various forms in public and private communications, he avowed his anxious desire that ‘a spirit of humanity,’ prompting to ‘the emancipation of the slaves,’ ‘might diffuse itself generally into the minds of the people;’ and he gave the assurance, that ‘so far as his own suffrage would go,’ his influence should not be wanting to accomplish this result” (Webster, “Address to the People of the United States, ... to Lift Our Public Sentiment to a New Platform of Anti-slavery,” Jan. 29, 1845).

Washington liberated his slaves upon his death, and in his will he required that young ones be educated to read and write and taught a useful occupation.