“Among those who glorified God by suffering martyrdom in the reign of Queen Mary,  JOAN WAST, a poor woman, deserves to be heard and stained in our rememberance.

Though blind from her birth, she learned at an early age, to knit stockings and sleeves, and to assist her father in his business of rope-making; and always discovered the utmost aversion to idleness or sloth. After the death of her parents, she lived with her brother, and by daily attendance at church, and hearing divine service read in the vulgar tongue, during the reign of King Edward VI,  she became deeply impressed with religious principles. This
rendered her desirous of possessing the word of God.

​​​​​So that at length, having by her labor earned and saved as much money as would purchase a New Testament, she procured one; and as she could not read it herself, got others to read it to her, especially an old man seventy years of age, a prisoner for debt in the Common Hall at Derby, and the clerk of the parish, who read a chapter to her almost every day. She would also sometimes give a penny or two (as she could spare) to those who would not read to her without pay.

By these means she became well acquainted with the New Testament, and could repeat many chapters without book, and daily increasing in sacred knowledge, she uniformly displayed its influence on her life, too the rage against those who occasioned her condemnation, as she was burned alive at Derby, August 1st, 1555, being then about twenty-two years of age” (James Townley, Illustrations of Biblical Literature Exhibiting the History and Fate of the Sacred Writings, 1842, Vol. II, p. 286, citing John Foxe’s Martyrology). 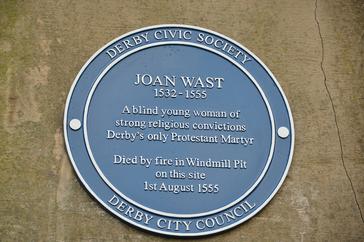