God Closing Churches - Why? There is a pervading movement in churches that intentionally undermines fundamental bibliology.  It starts with the number one reason why churches are dying: a motive for self-preservation coupled with self-exaltation. Many churches in this current environment of religious correctness are being seduced to dilute the fundamentals of God's Word. This is obvious because it is nearly impossible to distinguish between the religious world and many professing Christians.  The result has been an aggressive move to erode differences between fundamentalist and religionist and nurture a compatibility that is inconsistent with the biblical mandate for separation.  It is for this very reason among others, God will remove a church from it's existence in the ministry (Revelation 2 & 3).

It is foolish to think a church can be sustained when it ignores the relevance of being separate from the religious world that is indifferent to Jesus Christ and His Word. 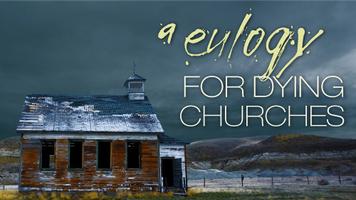 ​​Fundamental bibliology is not rooted merely in a denominational clan or creed. It is realized exclusively in the Word of God rightly divided. The exclusive use of God's Word has been reduced to inclusiveness along side the use of entertainment, contemporary worship for the sake of induced emotionalism and toleration for worldly acceptance. The sustaining of such churches (small & large) will inevitably collapse in coming years to entrenched religious licentiousness.

For  the  sake  of  the  Gospel
of  Jesus  Christ,  concerned
Christians and churches must
be  bold  in  their  prejudice
against religionist who intentionally exercise a misrepresentation and/or ill-interpretation of the Holy Scriptures.

Our chief asset is the Word of God rightly divided. This alone is what keeps a division between the ecumenical religionist and the Christ minded, Bible loving, holy living Believers.