​​There is a distinct difference between the two in how they act and react.  Note in particular Proverbs 7.

A godly woman above all else, values her submission to the indwelling Holy Spirit.  She understands that obedience does not mean enduring God's command... rather, she enjoys obeying God's will from the heart and is not ashamed of doing so (Ephesians 6:6). 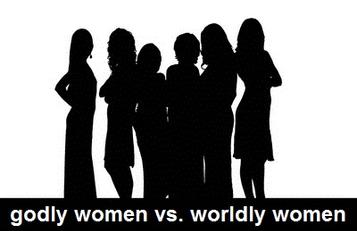 Christian Women.  Who Are They?   The Bible in no way neglects the importance and influence of women and the invaluable contributions they have made. Yet, the Bible portrays a distinct difference between the godly woman and the worldly woman. In particular, godly women have played an essential role in shaping the fabric of society.   While the worldly woman is often a tool used by Satan to undermine the wholesomeness of society.   However, the world's influence on Christian women in general has made it difficult to distinguish between a Christian woman verses the worldly woman.