Any Christian who justifies their consumption of alcohol must assume a false understanding of God's prohibition to alcohol. Thank God, the Bible is precise on this matter.  Don't be fooled by placing your preference over principle. We are to be filled with the Spirit of God... not the intoxicating influence of any sort of this world (Eph. 5:18). 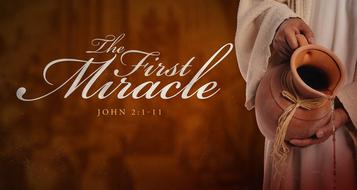 Disclaimer:  Google advertising encouraging the use of alcohol and/or other forms of intoxication is not endorsed by this website.

Did Jesus Turn Water Into Wine?
The term wine in the Bible is a generic term; sometimes it means grape juice; sometimes it means alcoholic beverages. The following verses prove that the word “wine” can mean fresh grape juice, the fruit of the vine: De. 11:14; 2 Ch. 31:5; Ne. 13:15; Pr. 3:10; Is. 16:10; 65:8; 1 Tmi. 5:23.
The context will always show when “wine” refers to alcoholic beverages.  In each case, God expounds the negative effects of it and sternly warns against it. An example would be Gen. 9, Noah’s experience after the Flood. Verse 21,   Prov. 20:1 revelas the same when it warns us, “Wine is a mocker, strong drink is raging; and whosoever is deceived thereby is not wise.”

The Bible warns against the drinking of alcoholic wine. The Bible is consistent in presenting this warning both in the Old and New Testaments.

When Alcohol is Acceptable?

Proverbs. 31:6,7 give us the only legitimate use of alcoholic wine in Scripture. “Give strong drink unto him that is ready to perish, and wine unto those that be of heavy hearts. Let him drink, and forget his poverty, and remember his misery no more.” This would be using it as an anesthetic; a painkiller.  However, this is not for everyone; he says in v. 6, “unto him that is ready to perish.”

Unlike our times,  they did not possess the knowledge we have for medicines. In particular, all the anesthetics that we have today.  In history (even recent history), about the only thing available to the average person would have been some kind of alcohol as anesthetics. Alcohol is a depressant; it is not a stimulant, as some think. After several drinks, one gets dizzy; then he will pass out. So this passage teaches that alcoholic beverage would be only for the person who is ready to die or in some form of grievous physical pain; there would be no hope for his life. All that would be possible would be to ease his pain and help him forget his misery.

Related Subject:  Christians And Alcohol - Can They Mix?