During a period of spiritual struggling, George Bennard (1873-1958) started to study and contemplate the cross of Christ. Bennard had been very active in the Salvation Army and later wa s ordained as a evangelist for the Methodist Episcopal Church. As he studied on the verse Philippians 3:10, "That I may know him, and the power of his resurrection, and the fellowship of his sufferings, being made conformable unto his death," Bennard got the theme for a hymn that has become one of the most powerful and  favorite for many, "The Old Rugged Cross."

understanding  of  the  cross  and  its

plan in Christianity.   Over a period of

time he studied more and more about the cross. He prayed and meditated on the cross of Christ, until one day he was able to say, “I saw the Christ of the Cross as if I were seeing John 3:16 leave the printed page, take form and act out the meaning of redemption.”   Through this experience and others in his life he penned the words and wrote the tune to our hymn,  The Old Rugged Cross. 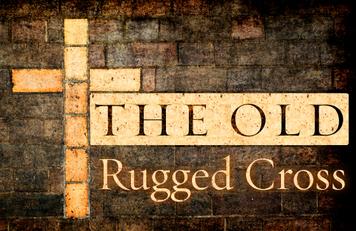 On a hill far away stood an old rugged cross, the emblem of suffering and shame;
And I love that old cross where the dearest and best for a world of lost sinners was slain.

O that old rugged cross, so despised by the world, has a wondrous attraction for me;
For the dear Lamb of God left His glory above to bear it to dark Calvary.

In the old rugged cross, stained with blood so divine, a wondrous beauty I see;
For 'twas on that old dross Jesus suffered and died to pardon ad sanctify me.

To the old rugged cross I will ever be true, its shame and reproach gladly bear;
Then He'll call me some day to my home far away, where His glory forever I'll share.

Related subject:  Carry The Cross.  How?