​Dear Dr. Belanger.  I read your topic on divorce.  Some would say that a man who receives Christ and then left by his unbelieving wife, would still qualify for the pastorate as I Cor 7 says "and if the unbelieving depart, let him depart." If the believing husband did not seek the divorce, would he qualify for the Pastorate if he later remarries? Lastly, how do we know I Tim 3:2 is not speaking against polygamous practices? Thank You... Doug, Rochester, NY

Among all other sins, divorce and/or infidelity is one of the most impacting negative influences on society and within the Church. The person who commits such an act will severely diminish their ability to influence the hearts and minds of people for the glory of God. (Prov.6:32). The office of pastor/deacon must always remain scripturally influential for the glory of God without blemish. This is especially true of one's marital history and status.

Can a divorced Christian become or remain a pastor?  The pastor/deacon above all else, possesses an office of an impeccable reputation by divine appointment. God will not lower His standards on marriage for the sake of tolerance. Very importantly, the pastor/deacon represents the perfect will of God.  They must be blameless of anything that is contrary to the office for the sake of influence.

Christians are continually having marital difficulties serious enough to contemplate divorcing. Pastors must have biblical convictions in order to share the Word of God concerning God's perfect will for marriage. They must be able to steer couples away from the prospect of divorce, and exhort them to stay together and work things out by God's grace. The pastor's own marital life must be an exhortation to this end. Otherwise their influence and counsel will not have the impact it needs. 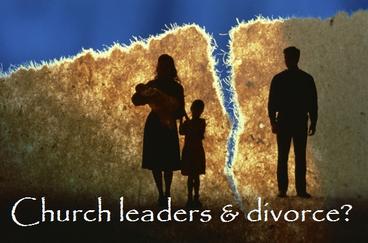 Disclaimer:  Google advertising encouraging divorce and/or alternative marriage life styles is not endorsed by this website.
Please be patient with us as we work to remove these ads. Thank You.

​​Can a divorced Christian preach and/or teach?   Absolutely YES!   God Does forgive all sin. Can a divorced person hold the office of a pastor or deacon? Taking the approach of a literal interpretation of scripture... the discerning answer is no. WHY? The prospective pastor or deacon should first be proved and then approved (1 Timothy 3:1,13). While God forgives... He does not for-go His standards.

1 Tim. 3:2 must be kept in context with the whole of scripture in relationship to marriage beginning with the emphasis of marriage noted in Genesis 2:24. Obviously, Paul is not wasting an important subject matter on what is obviously wicked (polygamy), but on the matter of being blameless or without the possibility of having any contrary appearance to the standard God has always had in place. Timothy was already aware of this and knew that Paul was not implying polygamy, but rather, God's standard of one man for one woman for life or until death due them part.

1 Corinthians. 7 is not  intended  to  be  an  exemption  from the standard God has in place for the pastorate. 1 Corinthians 7 is intended to bring a peaceful resolution between the believing spouse and the unbelieving spouse. While 1 Cor. 7:15 releases the believer from the bondage of an unfortunate marriage, it does not release them from the baggage that comes with divorce (1 Cor. 7:16).

The apostle Paul, who no doubt was a man of the scriptures, certainly had Gen.2:24 in mind as the basis for the standard of such an important office of influence. Jesus certainly did when he spoke on marriage/divorce (Matthew 19:5.9). The pastor/deacon "must be" (speaks of a successful marriage in present tense anchored by "principle" as commanded in Gen. 2:24). The husband of ONE wife (this statement must be viewed in light of Gen.2:24).

Generally and historically, there are two interpretations of Paul's list of qualifications for the pastor and deacon as it relates to marriage.

Which is better? Rightly dividing the word of truth coupled with sincere prayer will result in an agreement with the principle of strict and literal interpretation of scripture that marriage is God ordained unto death due them part (which applies to both believers and un-believers). When a Christian is not sure on this or any subject,  they should choose to take the high-ground of principle over preference. It would be the wise and safe approach to pursue.